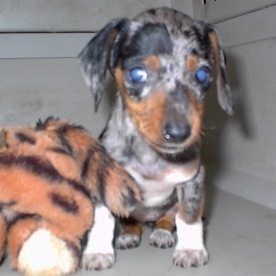 Over the years we have rescued quite a few dogs from backyard breeders and puppymills. I have written about the over-population of dogs in our country, and have advocated for spay and neuter programs nationwide. None of those efforts will curb the tide of over-population, however, because the breeders and the puppymills continue to produce millions of dogs each year.

I have talked with some backyard breeders that argue that their genetic line of dogs is superior to the “common” dogs of that breed, and therefore their breeding is actually good for the canine population. Some breeders claim that their dogs are the best dogs to train for companion and assist dogs. But I have witnessed many programs that pull dogs from shelters and train them to be excellent companion or assist dogs. And we have cared for many “common” pure bred dogs that were stunning in their conformation and coat. So the argument that breeders are good for the canine population falls on deaf ears where I am concerned.

So who regulates these breeders? The answer to that question surprised me. In at least ten states there are NO laws regarding the breeding of dogs. No license is required and no inspections of facilities are ever performed. In Texas, breeders are required to have a license. They are also required to undergo inspections every eighteen months. But I have seen with my own eyes how inadequate that regulation is.

Most of these breeders register their dogs with the AKC (American Kennel Club). So I did some research on the regulations required to register dogs with the AKC and I was horrified at what I found. The AKC has long billed itself as “The Dog’s Champion”. They have a committee that is tasked with inspecting large breeders and puppymills. But their inspections are kept private and are very sparse in nature. I read one report about a breeder in North Carolina that had passed their AKC inspection. But shortly after that they were busted and charged with animal cruelty because their dogs were either standing on 5 inches of packed feces, or stacked in wire crates where they urinated and defecated on the dogs below them.

I read a long list of proposed regulatory bills that the AKC fought hard to defeat. One example is a piece of legislation that requires puppy producers to adhere to basic care standards, such as regular feeding, cleaning, minimum space requirements, safe housing, and basic veterinarian care. One case involved an ordinance in Shelby County, Tennessee that would prevent dogs from being left in hot cars for more than an hour. The AKC article arguing against that ordinance called it unwarranted. A proposed USDA rule that would require breeders to provide six inches of space for a dog to turn around and lie down is being lobbied against by the AKC as being too burdensome. And they fought against a bill in three states that would prevent breeders from debarking their own dogs. We rescued a dog that had been debarked by its owner and he ended up with a broken jaw!

Why isn’t the AKC standing up for the welfare of our precious canine friends. The answer, as usual, is money. When they proposed in 1996 to put more restrictions on large breeders, many puppymills boycotted the AKC and started their own registries of purebred dogs. In 2011 the AKC revenue reached $59.5 million. $22.8 million of that came from registrations of litters and individual puppies. When the AKC saw their bank accounts decreasing they gave in to the puppymills. In fact they are now “platinum sponsors” of a group called the Missouri Pet Breeders Association, which is one of the organizations that boycotted the AKC for trying to crack down on puppymills.

So what exactly has the AKC done for the dogs registered with them. They have changed the criteria that make a beautiful dog a “winning” dog. They have established conformation standards that set a benchmark for traits that are extremely harmful to our dogs. These changes include shorter snouts on Pugs that produce dogs that can barely breath, smaller heads on Cavalier King Charles Spaniels that cause at least one third of that breed to suffer with syringomyelia which causes the dogs extreme pain because their brains don’t have enough room to grow. And we are all familiar with the double dapple Dachshund who carry beautiful coats but most often suffer with severe genetic problems.

I was asked a few days ago why I can’t report a breeder that is breeding nine year old females. My answer was that they were not doing anything against the law. And sadly, that is in fact the case across this country. The states that do regulate breeders don’t regulate things such as ages of breedable dogs. And now I know that the AKC, which I believed were advocates for dogs across this country, is only concerned about their bank accounts.

There are two answers to this situation in my mind. We must research and know what the laws for breeders are in our states, and we have to impress on our state representatives that we want this situation changed. And perhaps even more importantly we must spread the word that the AKC is not acting in the best interest of the dogs we all love. The public in general must be educated to stop seeing AKC papers as a sign of a “quality” dog. We all know what a quality dog is and it has nothing to do with any paperwork in our files!

9 thoughts on “Who Speaks for the Dogs?”