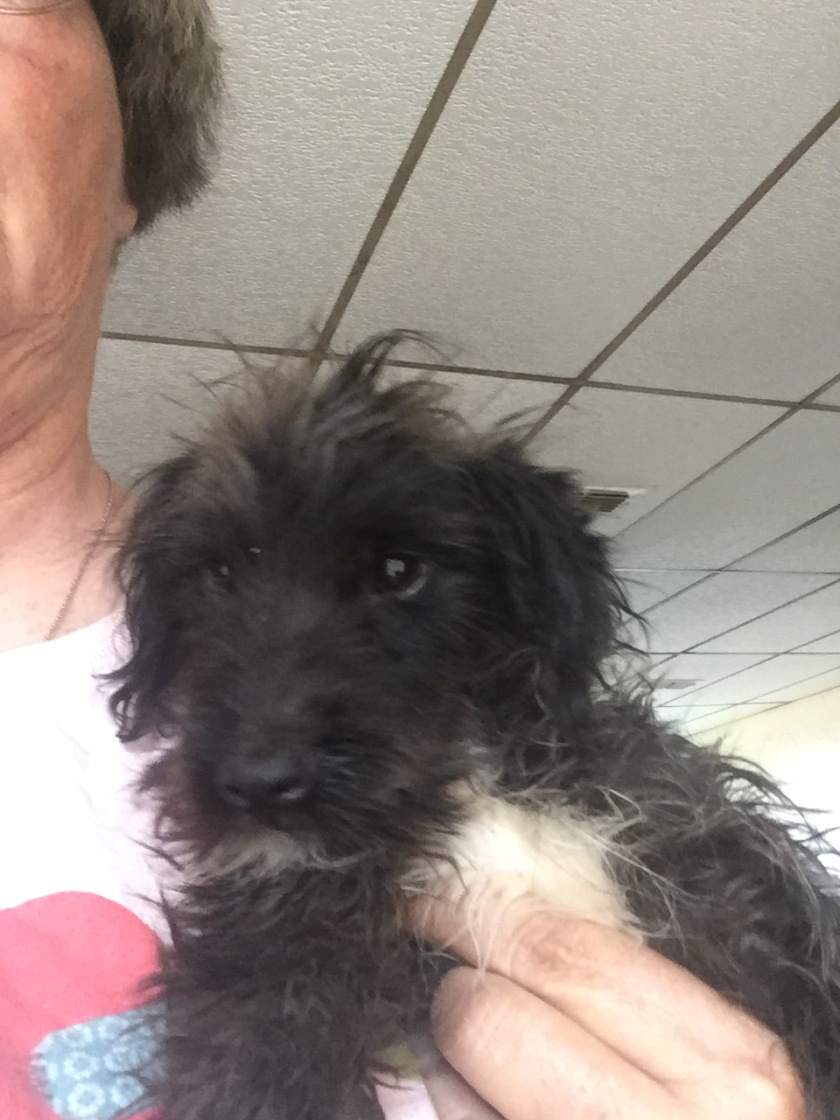 On June 20th of this year I rescued this little black terrier mix and a little red Dachshund mix from our local shelter. This baby was terribly skinny and very much in need of our love. I named her Chloe and immediately began to fall in love. She wouldn’t eat much for me that first evening, and when I discovered diarrhea in her isolation pen late that first night I began to worry. First thing the next morning I dropped her off at the vet for blood work and an exam by Doc Jess. Before the day was over I received a call from Doc Jess that sent me into a panic and broke my heart. Chloe had passed away with Parvo. Her little body had been ravaged by this heartless disease and it had spread to her heart and she could not be revived.

Chloe had spent her time at the sanctuary in quarantine because that is our policy with any dog from any shelter. I asked Doc Jess for advice on the care of the other young dog I rescued with Chloe and for concerns for my fragile seniors. She advised me to immediately get rid of anything Chloe had touched. I threw out the clothes that Rick and I had worn, I threw out the crate that Chloe spent the night in as well as the one that she and the other dog rode home from the shelter in, all blankets, and food and water bowls that they both used. The other dog was still in isolation, and we began to handle her with sterile gloves. I washed all of her blankets daily with bleach for weeks while we watched and waited for any sign that she was infected. Surprisingly, she never showed any signs of the virus and has since been placed in her forever home as a healthy, happy little girl.

I drew comfort from the knowledge that all the residents of the sanctuary had been vaccinated on a regular basis and were likely safe from the infection. My main concern other than the health of the new resident was the Parvo in my environment that might affect future rescues. Doc Jess and I both agreed that disposing of all materials that we could was the safest route to take. Small sacrifice as far as I was concerned for the safety of the next baby that needs our care.

My experience with Parvo is not unique in the southern part of the US this year. Many rescue groups have all but stopped taking dogs from shelters at this point as we have all been affected by this particularly strong strain of Parvo. There is even speculation in the vet world that this strain may be the first that is airborne. We have always been taught that Parvo is spread mainly thru contact with vomit or feces. So the idea that it might be spreading thru the air in our shelters is more than many of us can deal with. Our policy here at the sanctuary of ALL dogs being quarantined for at least two weeks in a pen away from the other dogs has been upgraded to three weeks in an enclosed room.

I’ve done some research on this new strain (2c) of Parvo and reports of adult, fully-vaccinated dogs contracting the disease is fodder for nightmares. Dogs who were once considered safe because they had survived Parvo earlier in their lives are also becoming infected. Some breeds such as German Shepherds, Pit Bulls, Rottweilers, Labs, and Dobermans are for unknown reasons more susceptible to the virus. All areas of the US are reporting increased Parvo this year but the southern states are suffering the highest degree of fatalities from this killer. This particular strain has even been reported in cats that were once thought to be safe.

Puppies that are vaccinated in our shelters are ironically more at risk because of the introduction of a small amount of the virus in the vaccine. The puppy’s blood can fight off the modified live virus in the vaccination but it leaves their immune systems weakened and more vulnerable to the full, live virus. Chloe had received a Parvo vaccination five days before I rescued her.

Successful treatment of a dog with Parvo can cost between $500 – $6,000. That is more than most rescue groups can absorb. That fact along with the increased risk of infection thru the air, and susceptibility of fully-vaccinated dogs will cost the lives of many precious dogs. Not only the dogs that are unfortunate enough to have contracted the disease but also for the dogs who will not be rescued because of the danger of infection thru their first Parvo shot and the possibility that it might be floating in the air.

I wish I could think of a way to keep my dogs completely safe. Unfortunately, I don’t believe there is an answer. The steps I intend to continue to take are to keep my dogs away from any dog that has not been part of our pack for years. We don’t do dog parks, we don’t do Petsmart with our dogs on a leash, and we don’t handle other dogs, especially puppies.

Chloe was the first dog in our over fifteen years of rescue that we did not bury on our land. The risk of that virus living for ten+ years in the soil was a risk we were unwilling to take. We will not stop rescuing as the babies still need us desperately, but we will take all precautions to insure that our pack is not exposed to even the slightest possibility of this new killer virus in our air.

4 thoughts on “Killer Parvo in the Air?”